After heart attack, mental stress affects the heart more in women under 50 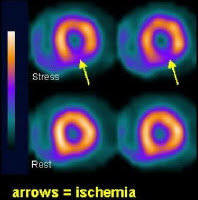 Women with a recent heart attack who were younger than 50 were more likely to experience mental stress-induced ischemia.

Journalists, Health, Research, School of Medicine, School of Public Health, Woodruff Health Sciences Center, Cardiology, Clinical Trials, Health Sciences Research
Researchers have found that women younger than 50 with a recent heart attack are more likely to experience restricted blood flow to the heart (myocardial ischemia) in response to psychological stress.
The finding may partly explain why younger women who are hospitalized after a heart attack face a greater risk of complications and dying, compared to men of the same age.
The results are scheduled to be presented Wednesday, Nov. 20 at the American Heart Association Scientific Sessions meeting in Dallas.
Researchers at Emory University have been studying the responses of patients who recently had a heart attack to exercise stress and mental stress, in the form of public speaking on an emotional topic. They have found that women age 50 and below are more likely to experience mental stress-induced ischemia, compared to men of the same age (52 percent compared to 25 percent).
The MIMS (Myocardial Infarction and Mental Stress) study included 49 men and 49 women, age-matched pairs who all had a heart attack in the last six months. Their ages ranged from 38 to 59. Among study participants older than 50, there were no significant sex differences in mental stress-induced ischemia;, however, men older than 50 had a rate of exercise-induced ischemia that was twice as high as women of a similar age.
"This is the first study to examine the cardiovascular effects of psychological stress as a possible mechanism for the greater mortality after myocardial infarction among younger women," says study leader Viola Vaccarino, MD, PhD, professor and chair of the Department of Epidemiology, Rollins School of Public Health. "We saw a dramatic difference in mental stress-induced ischemia specifically in younger women. In addition, when ischemia was graded in a continuous way, we saw that it was twice as severe among the younger women."
Women who experience a heart attack before age 50 are relatively rare, suggesting that those who do may have more severe heart disease. In fact, women tended to have less severe coronary artery disease, measured by examining the degree of blockage in their coronary arteries. Even when investigators adjusted for different rates of traditional heart disease risk factors such as smoking and diabetes, the disparity remained.
One possible explanation the Emory investigators considered was a higher burden of psychosocial stress, Vaccarino says. In the study, the younger women were more often poor, of minority race, with a history of sexual abuse and with higher levels of depressive symptoms.
"Yet if we look at the statistics, factors such as poverty, race and depression do not explain the difference," she says. "Yes, women have more stressors. But our data show that women also may be more vulnerable to the effects of mental stress on the heart."
"This could be an added stimulus to the medical community to pay more attention to the emotional factors in cardiac patients. We are now taking a closer look at potential physiological factors that account for the additional susceptibility in younger women."
Emory researchers working with Vaccarino have identified two areas where there are specific differences in younger women who had a recent heart attack: inflammation and heart rate variability, a measure of the responsiveness of the autonomic nervous system. Low heart rate variability has been previously linked to greater heart disease risk.
The inflammation data is being presented in a poster by postdoctoral researcher Cherie Rooks, PhD on Sunday, Nov. 17 and the heart rate variability data in a poster by assistant professor Amit Shah, MD on Tuesday, Nov. 19.
Interleukin-6 is a marker of inflammation that goes up and down quickly depending on someone’s environmental exposures including mental stress, even in healthy individuals. In the MIMS study, women age 50 and below had much higher levels of IL-6 in their blood, compared to age-matched men, both before the mental stress test and afterwards. Women and men older than 50 had similar levels of IL-6.
Heart rate goes up in response to physical or psychological stress, but the beats also become more evenly spaced. Heart rate variability is a measure of how much moment-to-moment fluctuation is present; higher heart rate variability is a marker of a more flexible, and thus healthier, autonomic system. In the MIMS study, younger women had their heart rate variability dip more in response to stress, compared to men the same age. This is additional evidence that young women after a heart attack may be more vulnerable to the adverse effects of psychological stress on the heart.
Vaccarino and her colleagues are continuing to investigate mental stress-induced ischemia, including how it affects mortality and complication rates, in a second phase of the MIMS study at Emory, which will include a larger sample with patient follow-up.
How the study was conducted
The mental stress test part of the study was a public speaking task involving an emotional topic. Participants were asked to imagine a real-life stressful situation, such as a close relative been mistreated in a nursing home. They had to quickly prepare a speech and deliver it in front of a video camera and an audience wearing white coats, while their blood pressure and other vital signs were monitored.
Immediately afterwards, cardiac imaging was performed to assess blood flow within the heart via SPECT (single photon emission computed tomography). On a separate day, study participants performed a standard exercise test on a treadmill; a few were unable to exercise at a high heart rate and had to have a "pharmacological" stress test with a drug that dilates coronary arteries.
The research was supported by the National Heart Lung and Blood Institute and the National Institute for Mental Health (R21HL093665, R21HL093665-01A1S1, R01 HL109413, K24HL077506, and K24 MH076955).
Publicado por salud equitativa en 2:56