The Human Genome Project, Then and Now - NYTimes.com

The Human Genome Project, Then and Now - NYTimes.com

A Conversation With Eric D. Green

Human Genome, Then and Now 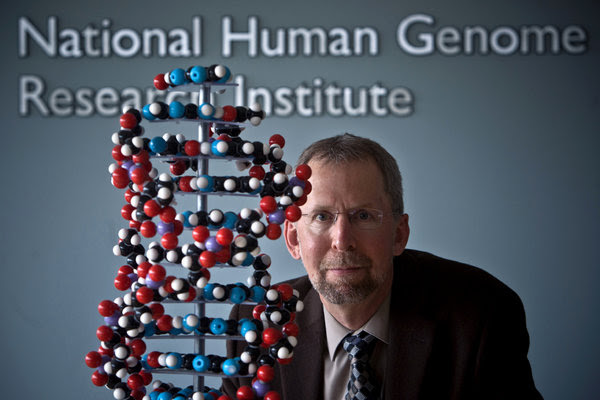 Eight years of work, thousands of researchers around the world, $1 billion spent — and finally it was done. On April 14, 2003, a decade ago this week, scientists announced that they had completed the Human Genome Project, compiling a list of the three billion letters of genetic code that make up what they considered to be a sort of everyperson’s DNA.

Connect With Us on Social Media

Like the science desk on Facebook.
To commemorate the anniversary, Eric D. Green, the director of the National Human Genome Research Institute at the National Institutes of Health, spoke about what has been accomplished, what it means and what is coming next. Our conversation has been condensed and edited.
Take us back to that day 10 years ago. Whose genome was sequenced? And why would anyone want to know the genome sequence of some random person? Aren’t we all unique?
The idea all along was not to sequence a person’s genome, but to develop a resource. It would be the sequence of a hypothetical genome, a reference genome. It was meant to represent humanity.
What does that mean? You used human DNA, right? Why was the genome hypothetical?
The way it was done then, we were reading out the letters of the genome, one page at a time, and at the end of the day different pages came from different people. Each page was a stretch of DNA, about 100,000 bases long out of the total three billion bases (the four chemicals that make up DNA). The genome of one person, an anonymous blood donor in Buffalo, was the majority because the guy who was the expert at making a big DNA library — the equivalent of those pages — was at Roswell Park Cancer Institute, which is in Buffalo.
But if that hypothetical genome was made up of bits and pieces of DNA sequences from lots of different people, what good was it?
It was a reference that could be used for further research. People differ in only one out of 1,000 bases, so that reference genome is 99.9 percent identical to any person’s genome. We used that tool to build sort of a highway map. We could go through it and add information about what was important.
The best analogy is to GPS in a car. It is nice to have a highway map, but you really want to know where is the shopping center, where is the gas station, the next park, a restaurant. We want to know where are the genes, the parts of the genome that code for proteins. Where are the places on the genome that people tend to vary? Where are the genes that code for diseases?
How hard is it today to sequence a person’s genome?
We can sequence a human genome in a couple of days for well under $10,000, probably around $4,000 or $5,000. And we sequence the genome you got from your father and the one you got from your mother. That’s a total of six billion bases. It is already around the cost of an M.R.I., and it will get cheaper yet. The original Human Genome Project sequenced just one representation, three billion bases.
How did it get so cheap?
In April 2003, right after the completion of the human genome, our institute put into print a call for technology to deliver a $1,000 human genome sequence. That became the battle cry. I remember thinking someday we would get to a $1,000 genome. I don’t worry about the $1,000 genome anymore. We have had six orders of magnitude improvement in a decade.
What about the naysayers who asked, “Where are the cures for diseases that we were promised?”
I became director of this institute three and a half years ago, and I remember when I first started going around and giving talks. Routinely I would hear: “You are seven years into this. Where are the wins? Where are the successes?”
I don’t hear that as much anymore. I think what’s happening, and it has happened in the last three years in particular, is just the sheer aggregate number of the success stories. The drumbeat of these successes is finally winning people over.
We are understanding cancer and rare genetic diseases. There are incredible stories now where we are able to draw blood from a pregnant woman and analyze the DNA of her unborn child.
Increasingly, we have more informed ways of prescribing medicine because we first do a genetic test. We can use microbial DNA to trace disease outbreaks in a matter of hours.
These are just game changers. It’s a wide field of accomplishment, and there is a logical story to be told.

A version of this interview appeared in print on April 16, 2013, on page D3 of the New York edition with the headline: Human Genome, Then and Now.