From this page, you may download a high-resolution version of the full infographic, as well as high-resolution versions of the individual components of the infographic.
These high-resolution, public domain images are ready to be printed in your publication, or shared on your publication’s website.
These images are in the public domain and are thus free of any copyright restrictions. As a matter of courtesy, we request that the content provider be credited and notified of any public or private usage of an image. 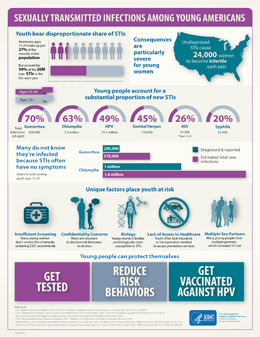 Sexually Transmitted Infections among Young Americans
Download High Resolution Version
While sexually transmitted diseases affect individuals of all ages, STDs take a particularly heavy toll on young people. CDC estimates that youth ages 15-24 make up just over one-quarter of the sexually active population, but account for half of the 20 million new sexually transmitted infections that occur in the United States each year.

This infographic highlights the impact, causes, and consequences of STDs among young people – and what they can do to protect themselves.

Youth bear disproportionate share of STIs
View High Resolution Version
Americans ages 15 to 24 make up just 27% of the sexually active population, but account for 50% of the 20 million new STIs in the U.S. each year.