By Nancy Maddox
As a registered nurse working in the neonatal intensive care unit, Chantel Murray knows a lot about babies. When her son Christian was born in 2002, Chantel had a C-section and was looking forward to taking her baby home after being hospitalized for several days. “The nurse was giving me discharge instructions, and we were all ready to walk out the door,” she said, when Chantel asked about newborn screening.
It hadn’t been done. 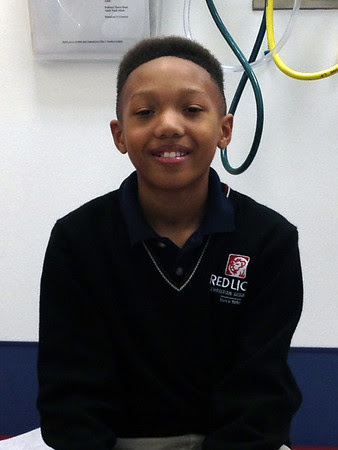 “Let me take him back real quick and do a heel stick,” the nurse said, referring to the single prick babies receive in the foot so a few drops of blood can be collected on a special filter paper card for laboratory testing.
“African-Americans are at high risk for sickle cell anemia,” said Chantel, so she wanted to be sure Christian had the benefit of early screening for the blood disease as well as dozens of other newborn screening disorders.
A week later, the first-time mom was back in the hospital with a uterine infection. “It was a very scary time,” said Chantel, who was, perhaps, most upset about being separated from her infant son.
While she was still hospitalized, Chantel’s husband, Kevin, called with more bad news:  Christian’s newborn screening test results came back with an inconclusive finding for cystic fibrosis, a serious illness that affects the glands that secrete mucus and sweat.
“I thought I had a healthy baby boy,” said Chantel. “We were completely shocked.”
As soon as Chantel was released from the hospital, she and Kevin took Christian to the Children’s Hospital of Philadelphia for a follow-up test, which came back positive. Chantel still couldn’t quite believe it was true. “I disputed the findings,” she said. “I went through all the phases of grief: denial, anger and the rest. This just couldn’t be happening to us.”
The hospital redid the test.
Then, said Chantel, “they took us into a room and all the physicians told us, ‘Your son has cystic fibrosis.’ At that moment, it was a very tough thing to handle. We wondered, what do we do from here on out? How do we explain this to our families?”
Kevin, said Chantel, was a lifesaver  She said, “Thank God for my husband. Even though I’m the nurse and I’m used to being around sick babies, it being my own child now who needed help, I just couldn’t manage everything in my head. He said, ‘We’re going to take it one day at a time.’”
Christian, now ten-years-old, gets respiratory therapy twice a day to prevent mucus build-up in his airways and takes digestive medicines every time he eats to replace the enzymes lost because of mucus-blocked pancreatic ducts.
“He understands he has cystic fibrosis,” said Chantel, who reports Christian “has been nothing but a bundle of joy.” The ten-year-old is extremely athletic and plays a highly competitive game of basketball in the Amateur Athletic Union. He aspires to be the first National Basketball Association player with cystic fibrosis. Christian also loves hip hop dance and “smiles all the time,” said his mom. “People don’t usually know he has any problems.”
After Christian’s diagnosis, Chantel and Kevin had their own genetic tests performed “because we wanted to know how he got this disease.” Results showed that Chantel is a cystic fibrosis carrier but her husband is not. That means Christian inherited one defective gene from his mom, and the matching gene had a spontaneous mutation – an extraordinarily rare event. Christian’s five-year-old sister, Bryce—who also underwent genetic testing—has no cystic fibrosis mutations.
Today, the family is an avid supporter of the Cystic Fibrosis Foundation’s Great Strides National Walk fundraising event, heading up Team Christian.
Although Chantel has had to handle more than most moms, she said, “I give the credit to God and to Christian. He does the hard work every day. We feel so blessed to have him in our life.”
Christian was one of 142,380 babies born in Pennsylvania in 2002. With an incidence rate of roughly 1 in 5,000, there were about 28 new cases of cystic fibrosis in Pennsylvania that year. Blood spot-based newborn screening for Pennsylvania infants is done by PerkinElmer Genetics laboratory.