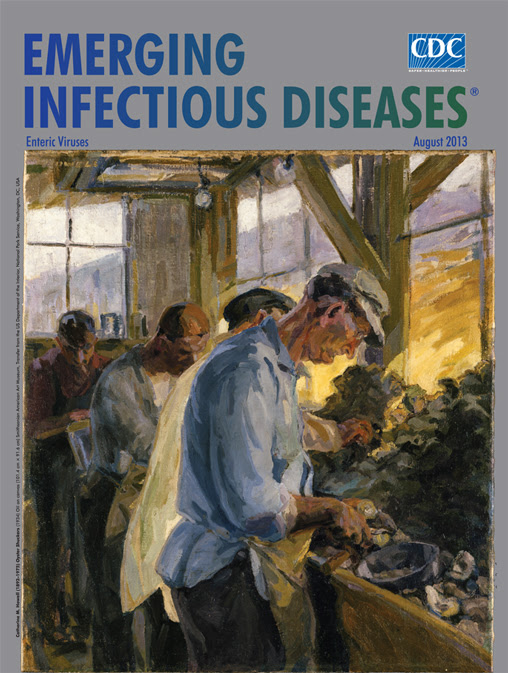 Catherine M. Howell (1892–1975) Oyster Shuckers (1934) OiI on canvas (101.4 cm × 91.6 cm) Smithsonian American Art Museum, Transfer from the US Department of the Interior, National Park Service, Washington, DC, USA
“The man sure had a palate covered o’er / With brass or steel, that on the rocky shore / First broke the oozy oyster’s pearly coat / And risk’d the living morsel down his throat,” wrote John Gay (1685–1732), one of many poets since antiquity who became fascinated with the subject. More recently, Irish bard Seamus Heaney after enjoying fresh oysters with some friends, was so moved that he wrote a poem, “Laying down a perfect memory / In the cool of thatch and crockery,” and affirming the general idea that those of us who have never swallowed an oyster may not have lived life to the fullest. “Our shells clacked on the plates. / My tongue was a filling estuary, / My palate hung with starlight: / As I tasted the salty Pleiades / Orion dipped his foot into the water.”
As if the experience were not enough, Heaney offered a little history, “Over the Alps, packed deep in hay and snow,” he wrote, “the Romans hauled their oysters south to Rome.” The proper way of moving oysters from place to place has not changed much. Nor has the process of growing, harvesting, shucking, or eating oysters changed. “Alive and violated, / They lay on their bed of ice: / Bivalves: the split bulb / And philandering sigh of ocean / Millions of them ripped and shucked and scattered” http://www.youtube.com/watch?v=BlEhHi_rdx0

Many thanks to Daniel C. Payne for proposing Oyster Shuckers and obtaining permission to use the image.