Share|
Category: Coding, Billing, and Collections, Laboratory Management and Operations, Laboratory News, Laboratory Operations, Laboratory Pathology
VN:F [1.9.10_1130]
please wait...
Rating: 0.0/5 (0 votes cast)
Veterans Administration calls it a “genomics game changer” and is now building a treasure trove of data for health researchers, including pathologists
Imagine a massive data repository that contains the blood specimens and genetic information of thousands of individuals, along with a detailed medical history for each patient that may reach back as far as 20 years! Such a data repository, long the dream of many pathologists and clinical laboratory scientists, will soon become a reality.
That’s because the Department of Veterans Affairs (VA) has announced what it calls the “Million Veteran Program” (MVP). It is actively recruiting one million veterans who are willing to provide a blood specimen. These specimens will become part of a database that contains the full electronic health records (EHR) of millions of veterans.
The VA has already signed up 10,000 veterans who will provide a specimen of their blood for the MPV data repository. Health researchers are excited, because the VA has used electronic health records for a full two decades. It is expected that this will become the world’s largest medical database.
Of course, patient privacy will be a main feature of the Million Veteran Program. All of this data will be anonymous since the VA will remove the veterans’ names. The data will become “a gold mine for medical research,” according to reporter Amy Standen’s story, which was broadcast on November 14 on National Public Radio (NPR). 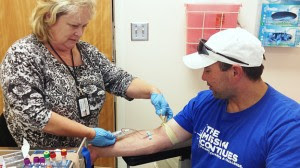 Since the Department of Veterans Affairs announced the creation of the Million Veteran Program (MVP) last June, more than 10,000 vets have signed up to participate and contribute a blood specimen. Here veteran Carl Schuler is shown as he provides his blood specimen for what is predicted to become the world’s largest genetic and medical information repository. (Photo copyright NPR.org.)
“Not only do we have all their clinical records—laboratory, vital signs, pharmacy database—we have annual assessments that we will do that we can track people, assessments of depression, post-traumatic stress disorder (PTSD), suicide screening, alcohol and substances, traumatic brain injury,” stated Jennifer Hoblyn, M.D., M.P.H., who specializes in mental illness at the VA of Palo Alto.
Unmatched Pool of Patient Data Can Advance Personalized Medicine
Screening, diagnosis, and treatment for some illnesses—such as some forms of cancer—have already been improved through knowledge about the effects of certain genes. With the Million Veteran Program, researchers will now be able to look for patterns from across a very large number of veterans. Many think that the VA’s comprehensive medical database will be the largest of its type in the world. There are expectations that this massive database could be the “kick start” to more rapidly advance personalized medicine.
According to the VA, the Million Veteran Program represents a “partnership” between it and veterans. A veteran’s program participation is voluntary and has no impact his or her access to health care or benefits. With the expected enrollment of one million veterans over the next five to seven years, some veterans have expressed their concerns about privacy—an issue which has made recruiting a million of them a challenge. In its explanation of the MVP’s data usage, the VA states: “Samples and health information will be available to researchers with VA, other federal health agencies, and academic institutions within the U.S. for future research projects approved by appropriate VA oversight committees.”
MVP’s Biorepository Will Support Sophisticated Clinical Research
Within the MVP repository, blood specimens will be collected, processed, and stored. These specimens will be made available to approved investigators for research purposes. The blood samples will be processed to obtain DNA and other materials that may be stored indefinitely until they are used up for research studies or they are no longer of scientific value. If a veteran decides to withdraw from the Program—and notifies the VA as instructed during the consenting process—then his or her DNA and other samples will be destroyed so that they cannot be used in any further research.
Database technology, new software, and gene-sequencing capabilities that exist today make it possible to identify all sorts of useful health information from the VA’s MVP treasure trove. It is predicted that researchers will use these veterans’ records in support of a wide range of clinical studies. Their findings may help create new evidence-based medicine (EBM) guidelines.
The long-term impact on laboratory medicine from the Million Veteran Program could be substantial. Access to DNA, RNA, and proteins from one million patients—in combination with the de-identified and detailed electronic health records (EHR) of these same individuals—could allow pathologists and pathology informaticists to do data mining on a grand scale. Such data mining carries the potential to uncover new ways to use existing medical laboratory tests to make more accurate diagnoses much earlier, possibly even when the patient is pre-symptomatic.