A new gene test may spare thousands of women with a common type of breast tumor from unnecessary radiation, according to a study released today at the San Antonio Breast Cancer Symposium . 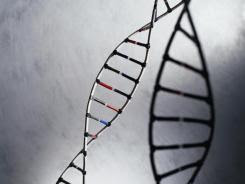