The most recent FluView report for the 2014-2015 flu season shows that flu activity is low across the United States, but there are early signs that activity is increasing, Flu activity is expected to increase further in the coming weeks.
CDC recommends an annual flu vaccine for everyone 6 months of age and older. There are documented benefits from flu vaccination, including reductions in flu illnesses, related doctors' visits and missed work or school. Vaccination also prevents flu-related hospitalizations and deaths.
If you have not been vaccinated yet this season, make plans to get your flu vaccine. Seasonal influenza and Ebola virus infection can cause some similar symptoms. However, of these viruses, your symptoms are most likely caused by seasonal influenza. Influenza is very common. Millions of people are infected, hundreds of thousands are hospitalized and thousands die from flu each year. In the United States, fall and winter is the time for flu. While the exact timing and duration of flu seasons vary, outbreaks often begin in October and can last as late as May. Most of the time flu activity peaks between December and February. Information about current levels of U.S. flu activity is available in CDC’s weekly FluView report.
In the United States, infections with Ebola virus have been exceedingly uncommon. There is widespread transmission of Ebola virus disease in West Africa.
It is usually not possible to determine whether a patient has seasonal influenza or Ebola infection based on symptoms alone. However, there are tests to detect seasonal influenza and Ebola infection. Your doctor will determine if you should be tested for these illnesses based on your symptoms, clinical presentation and recent travel or exposure history. (For information regarding the signs and symptoms of Ebola, and whether you may need to be tested, please review the Ebola case definitions.)

Vaccination against flu is especially important for American Indians and Alaska Natives, who have been found to be at higher risk for complications from the flu. Protect yourself and your community by getting a flu vaccine. 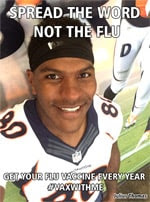 The National Influenza Vaccination Campaign aims to increase flu vaccination rates among all people 6 months of age and older across the United States, with a special focus on health care professionals and those populations at high risk of flu complications including pregnant women, people with chronic diseases, seniors, and young children.
Publicado por salud equitativa en 3:49