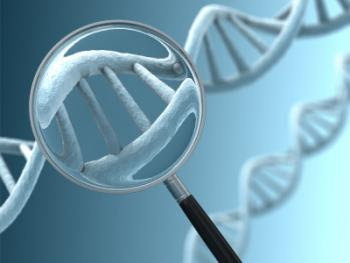 The team sequenced the DNA of patients with Barrett's esophagus and patients with esophageal cancer, and mapped out their genetic similarities and differences.


Researchers have pinpointed the genetic basis of why some people with a serious complication of acid reflux known as Barrett's esophagus go on to develop esophageal cancer. They believe their discovery, along with a novel non-invasive test, means esophageal cancer could be detected much earlier, thereby improving the prognosis of what is currently a cancer with a poor survival rate.
Writing in the journal Nature Genetics, the large international team, including scientists from the University of Southampton in the UK, describe how they found mutations in two genes mark the progression from Barrett's esophagus to esophageal cancer.
They also describe how a new non-invasive tool that uses a "sponge-on-a-string" is capable of retrieving cells from the esophagus that can then be tested for mutations in the two genes.
Such a test has the potential to completely change the game for diagnosing esophageal cancer much earlier than at present.

According to the American Cancer Society, esophageal cancer makes up about 1% of all cancers diagnosed in the US, where estimates suggest in 2014, about 18,170 people will discover they have the cancer, and about 15,450 will die of it.
Although survival rates for esophageal cancer have improved since the 1960s and 1970s, when only 5% of patients survived at least 5 years after diagnosis, today that figure is still only about 20%. Survival rates for people with early stage cancer are higher.
There are two types of esophageal cancer: adenocarcinoma and squamous cell carcinoma. People with Barrett's esophagus - a condition that can develop from prolonged, untreated acid reflux or heartburn - have a higher risk of developing adenocarcinoma of the esophagus.
Unfortunately, Barrett's esophagus often goes undiagnosed, making it difficult to spot people who are at higher risk of developing esophageal cancer.
Publicado por salud equitativa en 4:25